Learn to speak the language of photo and video

It doesn’t matter what business you’re in, there is one thing that every industry has in common: jargon. Acronyms, shorthand, and technical terms. Every industry has it, and no two are exactly the same. The jargon of an industry is unto its own language.

Here’s a quick linguistics lesson. Different languages are spoken all over the world, but most of them come from a few “root” languages. For example, English and German come from the “Germanic” root language, while Spanish and French are of the “Romance” root language. So, if we expand on that analogy back to industries, creative and business languages aren’t even of the same root. If creative is speaking French, business might as well be speaking Martian.

However, if there are two industries that we understand very well here at KreativElement, they are  business and creative. We bring that element of creativity that your business needs to push it up to the next level. So, I’m going to try and help bridge the gap between these two languages so that you can understand how, in this case, photography and video production actually help your business.

Camera movements are obviously an integral part of video production, but they are just as important in still imagery (photography) to communicate the needs of your project. 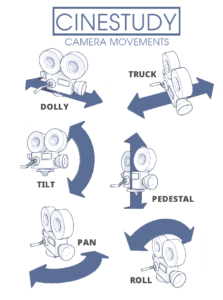 Yes, video and photo equipment is expensive, but the high cost is usually because it’s incredibly specialized and basically irreplaceable on set. Here are some of the common pieces of equipment you’ll run into.

C-stand
A multi-purpose, metal stand. The “C” stands for “century”, because the stand has “more than 100 uses”

Lavalier or Lav Mic
Teeny, tiny microphone you’ve probably seen clipped to the tie or collar of a newscaster

Gaff Tape or Gaffer’s Tape
Tape that is strong, tears cleanly, and can withstand high heat, all without leaving any residue on a surface when removed
Editor’s note: Gaff tape is one of those items where you should only buy name-brand. This list of items also includes, but is not limited to, mac ‘n cheese, and toilet paper.

Apple Box
A sturdy, multi-use, wooden box that does not contain any apples

“Hot Lights, or Continuous Lights”
Lights that are always on, used for video or photo

“Flashes, or Strobes”
Momentary or intermittent lights. Usually coming in very short and very bright bursts, used only for photography

“Available Light”
Lighting sources that are pre-existing on set, this includes sunlight

“Call Time”
This is the time you would like any group of production to arrive on set. There can be more than one call time. One for the production crew, and one for the talent

“Talent”
This is not a descriptor of one’s abilities, it simply refers to anyone who will be featured as a subject on screen

“B-Roll, Coverage, Insert Shots, or Inserts”
This can refer to any shots that will be used to cover someone talking, or any “beauty” shots. They can be close-up, or wide

“Wide, Close-up, and Medium Shots”
These describe how much a subject fills the frame of the image. If referring to a person, a wide shot is usually from the feet or knees up to the head, a medium shot would be from the waist up to the head, and a close-up would be head and shoulders or just the head

“That’s a Wrap”
The shoot is finished

“Stage Right and Stage Left”
This describes right and left from the point of view of someone on stage, facing the camera. It is directly reversed from camera right and camera left

“Stock Footage, or Stock Images”
Video or images purchased from a library available to the public

“Jump Cut”
A cut between scenes in a video where one is extremely similar to the other. This is usually considered bad editing

“Dissolve, or Fade”
An editing technique where one shot becomes transparent revealing the next shot.

“Martini Shot”
The last shot of the day

Photography and video production are easy jobs that anyone can do!
FALSE. Production is difficult and dirty work, with long hours and demanding clients.

Video is not important to my business.
FALSE. Videos tend to see 2x more engagement over still images.

Hiring KreativElement will help my business grow.
TRUE. KreativElement is your partner in marketing. We get to know your business inside and out, so that we can provide what you need, before you know you need it.

Ok, that’s more than enough for now. I hope that you, dear reader, can now better understand some of the language of photography and video production. If you have any questions at all, please feel free to reach out to us here at KE. After all, we are your creative business partners, and we speak the language of the locals.