How the Huskers Use Social Media to Win the Recruiting Game 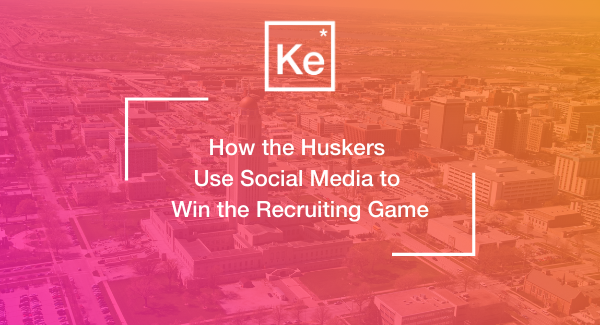 In Nebraska, there’s nothing bigger than Husker football. On game days, Lincoln’s Memorial Stadium becomes the third largest “city” in the state and grocery stores from Omaha to North Platte are so empty it might as well be the middle of the night. The history of the Huskers brand (and its championship pedigree) is well known around these parts. But what’s interesting and perhaps not as well-known about the legendary sports team is how effectively the university uses social media to reinforce its brand identity and win the recruiting game.

If you are a Huskers fan who is active on social media you’ve probably noticed a few things about the way they operate their accounts.

The Nebraska Football social media team is great at customizing content for each platform they post on. That means they create multiple versions of each image or video to optimize it for that specific platform. See a recent post below and how it appears on Twitter versus how it looks on Instagram.

Congratulations to all of our seniors graduating today!#GBR x #TheGoodLife pic.twitter.com/rzrUPP3jaE

As you can see, the post on Twitter has a rectangular image and the one on Instagram has a square image that swipes to the second half of the image. Had they simply created a square image and posted that one on Twitter too, the image preview would have cut off the top and bottom of the photo. And, we don’t know about you, but we’re not ones to stop and click on an image to open it while scrolling unless it’s a pretty compelling post.

In our professional opinion, this is one of the things that makes the Nebraska Football social media accounts so successful. While most of the content they create can be labeled as shareable content, they do an incredible job of creating content specifically for current players and recruits to share.

Let’s take a look at when the 2019 early signing period began. Each recruit that signed to play at Nebraska got three posts about them on social media – a short graphic video, an image, and a short highlight video. Check out the tweets on @HuskerFBNation welcoming Nebraska native Zavier Betts to the team.

These posts encourage the recruits to share the content with their followers while getting Huskers fans throughout the nation excited for next season.

They get others involved.

This is important. You’ll see them retweet other accounts that mention or feature the team. Perhaps most importantly, the coaches, players, and alumni are actively involved. This helps the fans feel even more connected to the team on a personal level.

Today we play for all of you. #GBR pic.twitter.com/OldAW7NuiG

Can’t express how thankful I am for every opportunity to that has came to me. Never know how good you have it until you see some of struggles others go through. Happy Thanksgiving everyone! pic.twitter.com/NYEp9WWQTh

Congratulations to my guy @BarrySwavey. He is a finalist for the Pop Warner College Football award. The same award I was blessed to receive back in 2010. I cannot think of a better man to represent @HuskerFBNation. pic.twitter.com/32GGTecylk

Their messaging is current/culturally relevant.

You’ll see the Nebraska Football social media team using lots of video (which, as we have discussed, is the future of content delivery), referencing popular culture or current events, and using hashtags and emojis. It’s not that they are trying to be cool or hip, they just know their audience.

While he has since left the University of Nebraska’s marketing team, the man formerly in charge of the Huskers’ social media shed a lot of light on how and why they do what they do with their social accounts, and why it matters for the brand as a whole. In 2011, Kelly Mosier was one of two people in charge of social media for the Huskers. When this article was originally published in 2016, there was a staff of 15.

These days, every young person is on social media and many of the Huskers’ recruiting targets see social media as a place to begin building their personal brands years before they even have the option of turning pro. Mosier saw it that way for the Huskers, as well. Except, rather than simply introducing recruits to the brand, it endears them to it. Mosier very astutely said:

“They always talk about the website is your doorstep to your business. Well, anymore, social media is the sidewalk that leads up to your door. So that’s really how you get people into your brand.”

Social Media Tips For Your Business

Even though the Huskers enjoy a crazy dedicated fanbase that the vast majority of brands can only dream of, we still think there’s a lot for the little (or medium-sized) brands out there to learn about how and why we all need to be on social media today.

Here are some social media tips the Ke team has borrowed from the Huskers:

Still not sure about jumping into the social media waters? Schedule a call with us. We’d be happy to discuss a range of options and what kind of plan we can create for you.